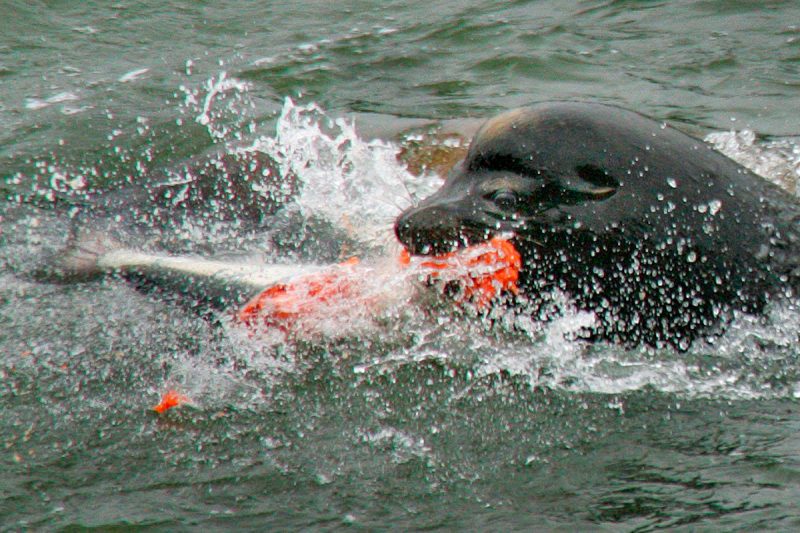 Until last week’s fire at the Robertson Island ocean pen, fewer than 100 Atlantic salmon have escaped from fish farms in B.C. over the past decade.

Many of the Atlantic salmon which escaped after fire damaged the Robertson Island pen off B.C.’s coast, are likely to have been eaten by sea lions congregating near the fish farm.

“The escaped fish are farm animals unaccustomed to living in the wild, and thus unable to forage for their own food and are easy prey,” said Chris Read, communications manager for Mowi Canada West, which owns the farm.

“Judging by the number of sea lions congregating near the involved farm it is likely many have already been eaten by predators. That said, we take our responsibility to prevent any impacts seriously, and will take every reasonable action to do so,” he said.

There is an overpopulation of harbour seals, California and Steller sea lions, in B.C. waters that is putting pressure on coastal salmon stocks. Fisheries and Oceans Canada estimates there is roughly 10 times the number of the predators as compared to the early 1970s.

Read said the fire-damaged pen has been secured and a full investigation has been launched to determine the incident’s root cause.

“If that investigation brings to light any actions we can take to prevent something like this from happening again in the future we will take them.

“While it has not been confirmed this was an electrical fire, to ensure every possibility is being considered, we will simultaneously be conducting a full review of the electrical systems on all our farms. This farm’s electrical system was installed just two years ago.”.

We are speaking with area First Nations, the DFO, and Province of B.C. We will be offering to collaborate on (and fund) monitoring for and capture of any escaped salmon going up streams on B.C.’s coast and surveying for any juvenile Atlantics in coming years.”

Farm workers at the Robertson Island site off Port Hardy noted damage to one pen during routine work the morning of December 20.

The farm was being harvested last week, so most fish had already been removed from the pen. Approximately 21,000 remained at the time of the fire.

The B.C. Salmon Farmers Association (BCSFA) said its members have a target of zero fish escapes and are constantly striving to prevent escapes and improve methods, equipment and procedures that can minimize or eliminate escapes.

Since 2011, fewer than 100 Atlantic salmon have escaped from fish farms in B.C.

Millions of Atlantic salmon have also been intentionally released into B.C. rivers and lakes, beginning more than a century ago and dozens of attempts were made to establish viable Atlantic salmon populations on the West Coast.

All the documented experiments concluded that no spawning populations had survived because farmed Atlantic salmon are poor colonisers when competing with wild Pacific salmon.

“In all of the wild salmon sampling we have done over the years, there has not been a single Atlantic Salmon found,” said Read.

Here are some of the key elements established by the world’s leading aquaculture and fisheries scientists about farmed salmon escapes in the Pacific Northwest.

Interbreeding: Concerns about crossbreeding/ interbreeding farmed salmon (Atlantics) with wild Pacific stocks in the event of escapes are unfounded. Over the past 40+ years, hatchery scientists made many attempts to interbreed these different species; all were unsuccessful.

Competition for food: Concerns about farmed salmon taking over habitat, if, and when, they escape, are unfounded as well. Again, peer-reviewed studies have shown convincingly that “captive” or pen-reared salmon have not learned how to “hunt” for food, simply because they are used to being fed on a regular timetable. Atlantic salmon, in particular, appear to be non-competitive with local species. Moreover, when the stomachs of “escaped” Atlantic salmon are examined, they have been found to be empty. In B.C. over the last decade, fewer than 100 fish have escaped from salmon farms each year.

Habitat invasion: Scientists to date have found no evidence of Atlantic salmon spawning on the West Coast of North America. Canada’s Department of Fisheries (DFO) has consistently maintained that there is an extremely low likelihood of Atlantic salmon becoming established in B.C. waters.

Photo of a sea lion chomping on a salmon – NOAA 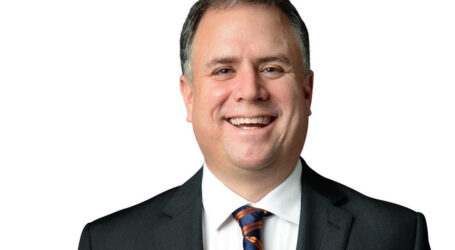 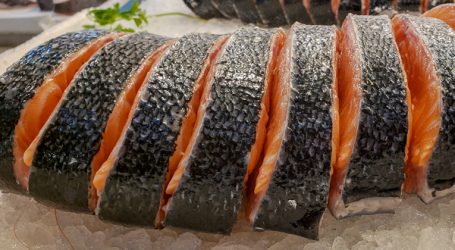 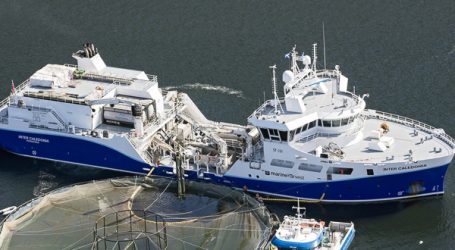