Aquaculture summit, Seafood West 2018, in the ‘Salmon Capital of the World’ was all about working together to protect wild fish

Seafood West 2018, was held in conjunction with the 34th Annual General Meeting of the British Columbia Salmon Farmers Association (BCSFA), which welcomed its new president David Kiemele of Cermaq Canada.

The BCSFA represents 56 businesses and organizations throughout the value chain of finfish aquaculture in B.C. Its members account for over 95% of the annual provincial harvest of farm-raised salmon, 100% of the salmon feed produced in B.C., and most of the service and suppliers involved in ensuring that over $700 million of salmon raised in B.C. gets to domestic and global markets.

Here are some key messages from the podium, and on the sidelines, of Seafood West 2018;

‘One of the major misconceptions of the salmon farming industry is that it does not care or think about the state of wild salmon and the environment. However, science has repeatedly told us that wild and farmed-raised fish populations can co-exist in the ocean and salmon farming actually plays a crucial role in protecting wild fish by providing a sustainable alternative. The most important part is about connecting with the public as who we really are, and not to be so focussed on what others make us out to be. We are stewards of the environment, not just tenants.’

Chief Christopher Roberts of Wei Wai Kum First Nation in Campbell River, signalling his openness to discuss with industry, the future of salmon farms operating in his people’s traditional territories.

‘To be honest I struggled a lot with whether or not to come here today as it is a politically contentious issue within my community and being a leader I want to ensure that my people know that I have got their best interests at stake. The Pacific and changing ocean conditions of upstream developments and sewage in the ocean are just a myriad of things that salmon face and it was reassuring to see that the conversation (at the recent Assembly of First Nations) looked at so many other things and wasn’t just about salmon farming issues being the culprit, so I like to see that. Let’s walk down a pathway together to either validate or dispel, to move forward based on facts of what’s happening in the ocean. We are pleased to sit down with the industry operating in our territories, their agencies such as the BCSFA to explore what it is that needs to be done to achieve a common ground and how we would all work together…because we are all here, no one is going anywhere.’

Chef John Carlo Felicella of B.C.’s Culinary Team was one of the featured chefs for the Seafood West Reception. BCSFA has a new partnership with the BC Culinary Team as it works towards gold medal status and world recognition while representing BC at the 25th Culinary Olympics in Germany in 2020.

‘Our team is made up of eight core people that will compete and represent BC, and represent our profession, our regional food and that is what we do.  BC salmon farmers are one of our partners we have been working with. We are going to continue on with the success that we have with our menus, and continue working with sable fish and farmed Atlantic salmon. We are a culinary team, we represent food, and we don’t get paid to do this, we do it on our own time. This is part of our life, competing for our region and our country. A lot of chefs work with farmed Atlantic salmon and they know it is a great product. Your product works and it is a phenomenal product.’

‘The exponential growth of the aquaculture sector, particularly in the area of technology and science has been remarkable and a great message to get out is what’s being done to ensure the sustainability of all fishers. The Salmon Centre of Excellence is the collaboration of not only the BC Centre for Aquatic Health Sciences but also North Island College to expand educational opportunities and developing science based evidence not only for the aquaculture sector but for our whole ocean environment. The Salmon Centre of Excellence would allow the BC Centre for Aquatic Health Sciences Centre to expand and hopefully to include a wetland to be able to enhance research and work in collaboration with the Pacific Salmon Foundation, the Campbell River Salmon Foundation, First Nations and all of the agencies that all have a common vested interest in the protection of our environment.’

Dr. Richard Beamish, retired scientist from the Department of Fisheries and Oceans (DFO) who is planning an expedition across the Gulf of Alaska to study the ups and downs of wild salmon returns.

‘We still don’t know the mechanisms that allow us to accurately forecast salmon (returns). No one has ever done this in the Gulf of Alaska, where the bulk of our salmon are in the winter. The total Pacific wild salmon catch has massively spiked in recent years. In Russia alone, it reached 650,000 metric tonnes this year. This catch is so large that [it] will shake up the science all around the North Pacific while people try to figure out what has happened. The proposed study would explore a vast area of ​​the ocean that is crucial to the B.C. salmon file. Salmon farmers are a major supporter of this expedition.’

Barton Seaver, director of the Sustainable Seafood and Health Initiative Center at Harvard’s School of Public Health is an author, chef and sustainable seafood advocate.

When there are problems with aquaculture, the entire industry gets rejected, whereas when other food production industries face problems, they do not meet with the same broad-sweeping criticism. We have to defend just to get to neutral.  We need to tell the story of aquaculture more effectively. Seafood tends to be healthier than chicken, pork or beef, and the industry has less effect on resources and the environment in terms of the resources needed. It is chefs that can teach us about seafood.”

“The intent of the Barton report is to unleash growth potential in Canada, to identify a few sectors where Canada has strong endowment to untapped potential and a significant growth process. The budget of 2017 announced the creation of 6 economic strategies, the first one is Agrifood and Aquaculture, followed by Advanced marketing, Clean Technologies, Digital industries, Health and Life Sciences, and Clean Resources. We are extremely pleased to see that Dominic Barton, and a lot of us in this room, see aquaculture as a start to, really, to create conditions for strong, sustained, economic, long termed growth.”

Stewart Muir, Executive Director of Resource Works, is a historian and award-winning journalist with a passion for the natural legacies of British Columbia.

“It’s not just, “let’s have a vision for the economy”. It is how are we going to adapt socially through our values and my project Sharing Salmon is about getting into communities to find out what their values are so we can grow them.” 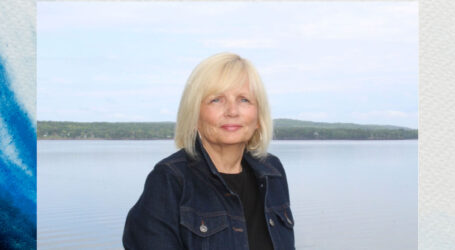 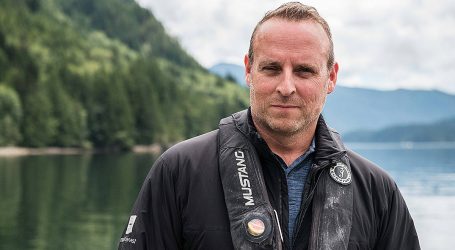 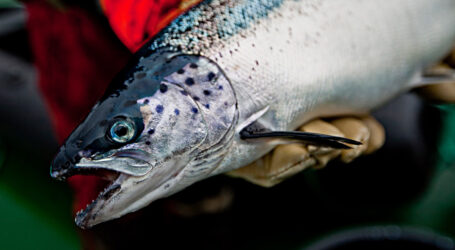